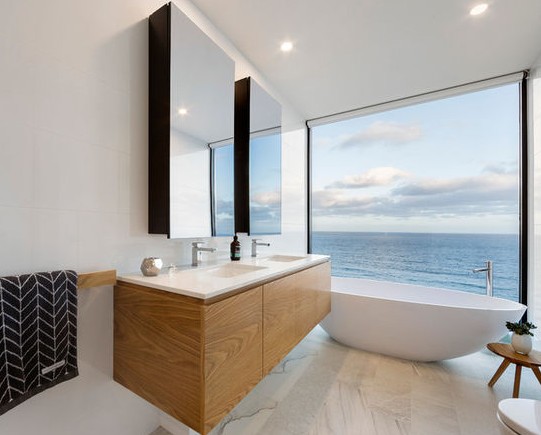 The modern bathroom is no longer a strictly utilitarian place where people go to do their business and leave as soon as they can. Now, it can be a homeowner’s personal spa and for less than they think. This is because most bathrooms are still small, and luxurious materials can be installed for not too much money. Here are some of the hottest design trends for the bath in 2018.

A monochrome colour scheme doesn’t have to be boring. Indeed, if it’s done the right way it can be dramatic or even relaxing. One of the most popular monochromatic colour schemes is the all-white bathroom. This bathroom would have white sink, tub, toilet, mostly white tiles, maybe a white shower curtain, window mullions and even white embellishments such as columns or pilasters. The one risk of an all-white bathroom is that it may look sterile and cold. A remedy may be to use different shades of white, especially the warmer whites. Small, colourful motifs in the tiles can break up the whiteness as can metal fixtures plated with shining chrome or bronze or a side chair or area rug in neutral colours.

A soaking tub is deliciously deep, and sometimes one end is a little higher than the other so the bather can comfortably rest their head. The tubs are often freestanding and island bathtubs, which means they can be placed anywhere in the bathroom. They can be made out of several materials including enamel steel or enamelled cast iron, fiberglass, and acrylic or cast polymer, which can be made to resemble sumptuous materials such as granite or marble. They can also be trimmed in exotic woods such as mahogany or teak to coordinate with the decor of the bathroom. Tubs made of steel or cast iron tend to be a bit heavy, so make sure that the subfloor can hold them.

Shower stalls can become shower rooms. All it takes are shower heads like waterfalls, steam jets, nooks to hold shampoo and soap, built-in benches to sit and windows to gaze out of.

Bathrooms have not only become personal spas, but they’ve become high tech personal spas. Showers can be programmed to control water pressure, temperature and the color of the lights. Panels even control the entertainment system. Electric towel warmers keep towels toasty with the touch of a timer switch, and heat lamps keep shower stalls, vanities and tubs from being chilly. Hand operated faucets are just the thing for little people who are a bit too short to reach the handles. Faucets can also be fitted with scald guards that keep water temperatures from getting too hot.

Modern tile comes in all kinds of shapes, sizes and materials, and the patterns they can be arranged into are almost limitless. Indeed, the tiles themselves can come with patterns. They can range from a simple flower or diamond in the centre of the tile to intricate Persian or Turkish based patterns to beautifully collared Spanish azulejo. Though an entire floor or wall of richly patterned tiles can be a bit much, they can be used as borders or as part of a central medallion.

Japanese households have been tucking the toilet away, often in a box made of hinoki wood, for a long time. Now, Westerners have decided that the sight of the throne is probably not the first thing a person wants to see when they enter the bathroom, even though it’s probably why they entered the bathroom in the first place. Hiding the toilet behind a half-wall faced with tile or made of glass bricks is classy.

Giving a bathroom even some mild updating for 2018 can be a fun project. Don’t be afraid to turn this once pedestrian room into an oasis of pleasure and relaxation.

Written by Bob Gorman at bob.gorman@go8.com.au